On May 14th, I followed some Chipping Sparrows and Clay-coloured Sparrows into the woods of Emily Murphy Park. When I lost track of them, I continued on the trail, scanning the surrounding trees and shrubs for other feathered creatures. Spring was still springing, and the tiny, new, wrinkled, light-green leaves had yet to become hiding places for the forest birds. So it was easy to spot a Cooper’s Hawk nest in the four-pronged fork of a large birch tree.

On May 26th, the leaves had gotten much bigger.

On June 4th, I was hoping for chicks, but Mrs. Cooper was still sitting patiently on her eggs.

On June 27th, Mrs. Cooper was standing in her nest. Different! The small tree branches and their leaves were dancing wildly in the wind, so in each photo I took, the leaves were in different places. A few photos were just green blurs.

There seems to be a little white down in the nest. 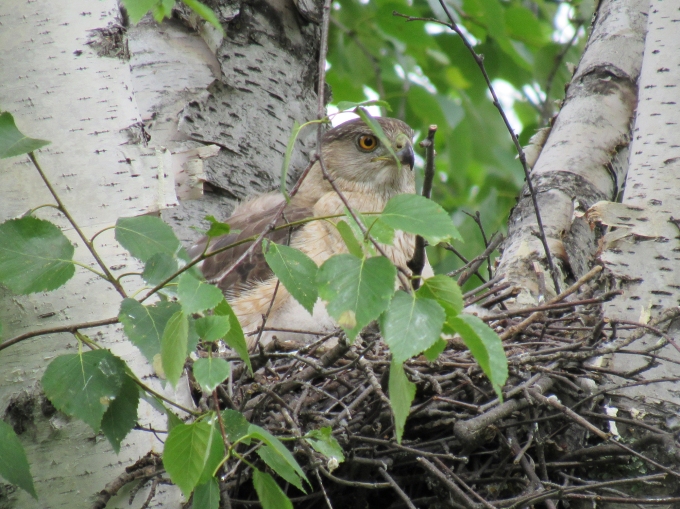 Oh! There seems to be a lot of white down in the nest. I would have to wait until another day to see little dark-grey eyes.

Cooper’s hawks lay 1 to 7 eggs, with 3 to 5 being typical, and eggs are usually laid at 2 day intervals. Incubation starts when the third egg is laid and lasts 30-36 days. Only the female develops an incubation patch. She sits on the eggs all night and most of the day. During the day, the male will incubate 2 or 3 times, for about 10-25 minutes, while the female uses a nearby perch to consume prey brought by the male. The first three laid eggs hatch at about the same time, while later eggs hatch asynchronously, at about the same intervals as laying. [1]