Remember Gwyndolyn’s goslings? They were born on May 4th. Interestingly, one hour after photographing Gwyndolyn and her new goslings, I photographed a pair of American coots copulating on the edge of her little island. I guess they felt inspired! Less than a month later, they were the proud parents of at least 7 coot chicks, two of which were photographed in my last post (those chicks are about 42 days old). Unlike ducks, coots do not have penises, so a male passes his sperm to a female via a “cloacal kiss”. Only 3% of bird species have males with penises. In the other species, there are genes which code for a penis but their expression is turned off by another gene called Bmp4[1]. Only birds in the two oldest lineages, Palaeognathae (ostriches and other flightless birds) and Galloanserae (land and water fowl like ducks, geese, chickens, grouse and pheasants) have penises. All other modern birds, including American coots (order Gruiformes), are in the clade Neoaves.

I recommend clicking on the first image to view all the images with accompanying text as a slideshow.

A coot was preening in the shallow water by the shore of Gwyndolyn’s island.

I photographed the bird for about 30 seconds.

And then he/she started to walk away. 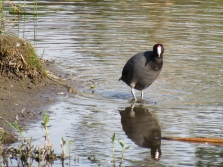 But he/she stopped when he/she heard a persistent series of croaky squawks. I remember them sounding like the first perturbation call on All About Birds: https://www.allaboutbirds.org/guide/American_Coot/sounds 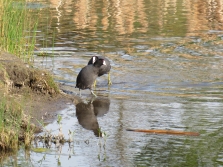 And now it was clear that he/she was a she. 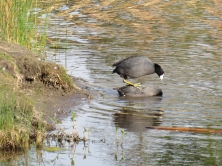 Mr hopped onto her back gracefully.

Here, Mrs was just starting to arch her body the other way, into a barely curved U, raising her head and tail while Mr flapped his wings for balance. The time was 8:10:04.

Two seconds later, copulation was almost over. According to Gullion, the male rears back as the female raises her head and their cloacal openings meet as he hangs onto her back with his claws [3]. Gullion refers to the brief copulation as intromission. However, the male does not have an intromittent organ (penis).

One second later, Mr was swimming away from Mrs. How did he get there so fast??? Did you notice that Mr and Mrs have different coloured legs? My guess, based on a 1952 paper by Gullion, is she was less then 2 years old whereas he was more than 2 years old.

American coot pairs build their nests during the courtship period, before copulating. Their nests are often hidden within dense stands of cattails and/or bulrushes; they are small floating platforms, woven from dead stalks of vegetation and attached to living, vertical stalks. The female lays 8 to 12 eggs, one every 24 hours, or two eggs after a period of 48 hours. The male and female take turns incubating the eggs, and the eggs hatch asynchronously. The time elapsed between the last laid egg and the last hatched egg has been recorded at 23 to 27 days.[2]

The young are born precocial. They are capable of leaving the nest about 6 hours after hatching (they are buoyant after their down has dried and been fluffed) but they sometimes wait 1 or 2 days. One of the parents leaves the nest with the early hatchlings. When eight of the eggs have hatched, both parents usually leave the nest. If some eggs remain in the nest, they fail to hatch due to parental abandonment. A period of up to a week has been observed between the hatching of the first and last coot chick.[2]

I did get a photo of one of the coots carrying nest building materials 40 minutes before mating (May 4th, 7:28 am)!!! 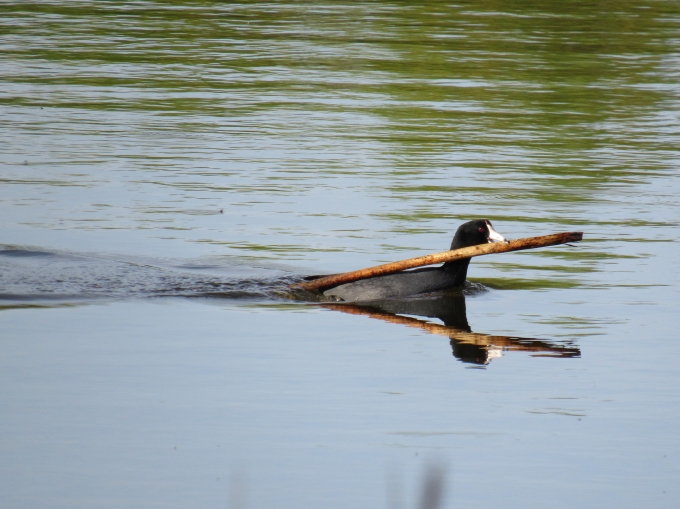