In late April of this year, while walking along the top of the Bowmont Park bluffs, I noticed some holes in the glacial till cliffs, which looked like good homes for some kind of swallow.

On Sunday June 5th, I had the pleasure of seeing and hearing hundreds of Bank Swallows flying and twittering in the air near the bluffs. I recorded a little video to document how fast the swallows zip around. The sound isn’t very good – my camera makes a buzzing sound when I zoom out and there is a windy sound that almost drowns out the swallow twitters (I found wearing only my right ear-phone helped a bit) – but the magic of the swallows’ movement and numbers is much better represented in this video than in any photo I took.

I used high-speed burst mode on my camera to capture photos of the fast-flying birds. Three in a series looked like they would make a fun gif. I hand-held my camera, so the three photos were not perfectly aligned, and I had a bit of a tough time aligning them in Photoshop. But I did succeed in creating my first gif!

The nest hole below was quite close to where I was standing, maybe 2 or 3 metres away. Luckily, the swallows occupying that hole were fond of hanging out at the entrance for long periods of time so I got some detailed photos of these usually fast-flying birds. 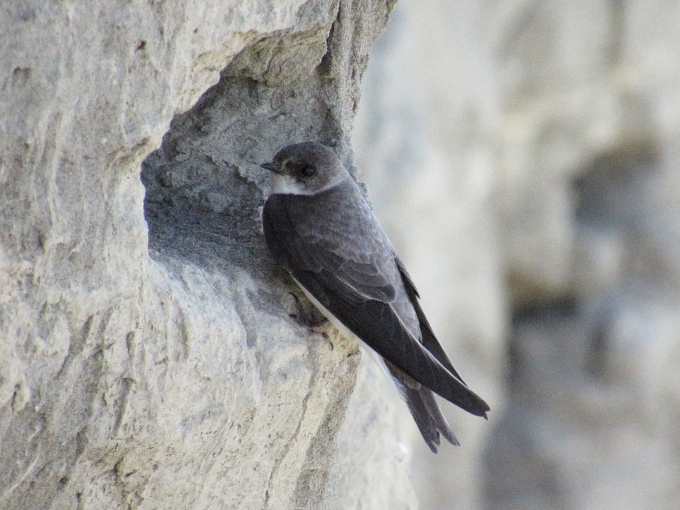 In the next photo, the bird on the left is in the nest hole above. There were lots of other holes, with tens of other swallows, on this vertical portion of the bluff. I noticed three other vertical walls with Bank Swallow nest holes, separated by less vertical, vegetated bluff sections. 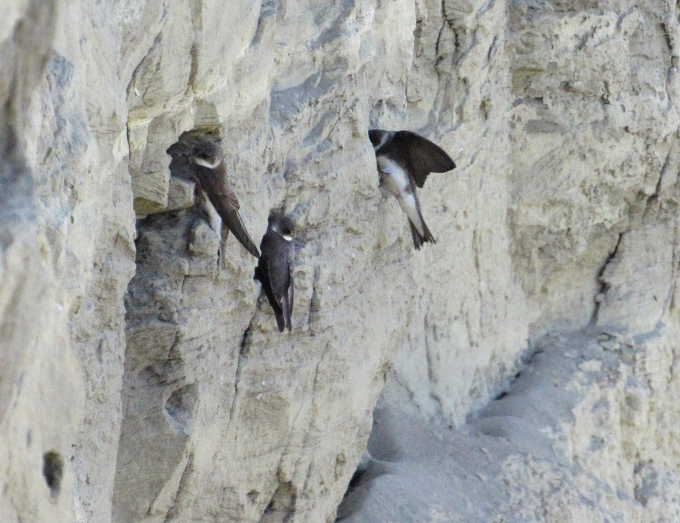 Bank Swallows live in low areas along rivers, streams, ocean coasts, or reservoirs. Their territories usually include vertical cliffs or banks where they nest in colonies of 10 to 2,000 nests. (1)

The Bow River is a short walk from the base of the cliffs and there are other Bank Swallow colonies that nest in the banks of the river (check out this post on the Birds Calgary blog). Below is a view of a section of the bluffs in late April. The river is a wee bit visible, a little right of centre. The expanse of dirt on the right continues for acres and acres – one day it will be a constructed wetland which will treat stormwater runoff and be home to a variety of birds and other animals. 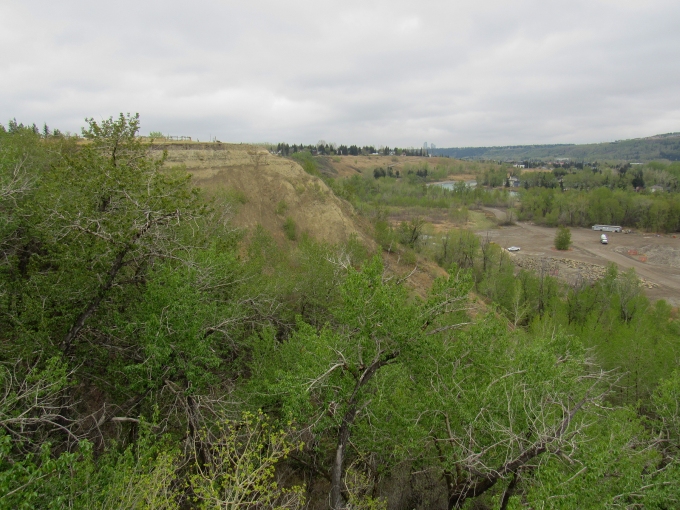 Bank Swallows almost exclusively eat flying or jumping insects, such as bees, wasps, ants, butterflies or moths. The swallows catch insects while flying, usually at a height of 50 ft above water or open ground. Bank Swallows only occasionally take insects from the ground or from the surface of water. They can feed singly or in large groups. (1)

Besides swallows, I also saw wasps fly out of holes in the cliffs – small, wasp-sized holes.

Male Bank Swallows use their small, conical bills as well as their feet and wings to dig burrows that will lead to a nest chamber. The burrows are perpendicular to the ground level and, when finished, are dug about 25 inches into the side of the bank. The male enlarges the tunnel upward and to both sides to form the nest chamber. (1)

I haven’t read about the formation of the holes in this particular cliff anywhere, so I can’t be sure, but it looks to me like the holes were created by Bank Swallows. They look like burrows, not geological formations. I suppose that many of the holes are revamped and reused each year. Maybe a few swallows don’t succeed in securing a pre-built hole and must dig their own. 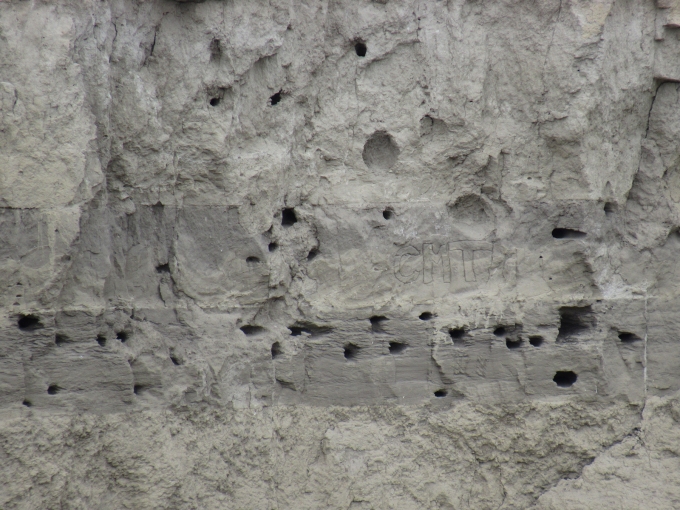 1. Cornell Lab of Ornithology – All About Birds