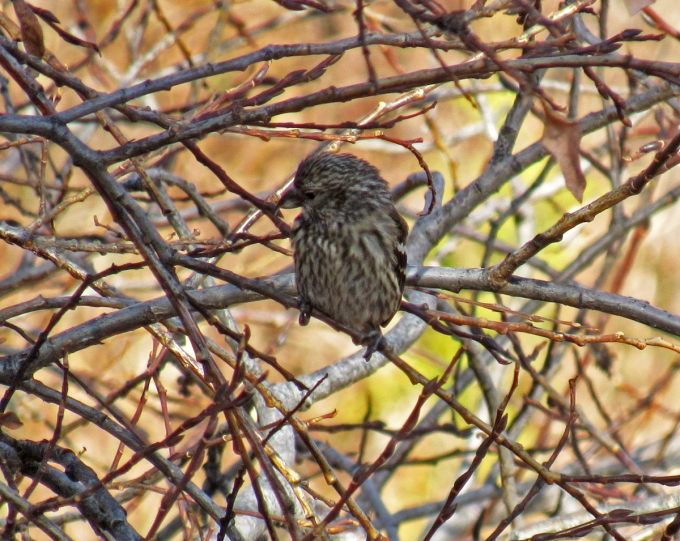 There is a tiny shallow pool of almost stagnant water on the northwest corner of River Park. A clump of cattails grows there and little birds like to hang out in the nearby bushes and trees. It isn’t an easy place to take pictures – there usually are just a few little birds and they tend to be screened by lots of tiny, criss-crossing branches. But I thought maybe I would get lucky and an unusual finch or sparrow would give me a photo moment. Strangely, the area was filled with House Sparrows, though I usually don’t see them in the park (there is a dense, residential neighbourhood across the street so it wasn’t super strange). There I was and there they were, and I thought it would be good practice to follow them around and try to snap a clear photograph. I came home with many pictures of House Sparrows and one juvenile White-winged Crossbill. The crossbill was a surprise. On my camera’s display screen, its streakiness suggested a female House Finch. My large monitor at home showed the long, curved upper mandible and the sliver of wing with two white wing bars.

The upper mandible curves down but it does not curve to the side. It is the lower, shorter mandible that curves to the side – it curves right in about 75% of White-winged Crossbills (All About Birds). In Red Crossbills, right and left crossing bills occur in equal proportions. White-winged Crossbills live year-round in most of Canada and Alaska and a few small regions in the US south of Canada (All About Birds). They are irruptive migrants; some years, if spruce cone crops are low in the boreal forest, they will fly further south, all over the northern half of the US. All About Birds suggests this spruce tree survival strategy:

“Winter finches come south not so much out of choice but because the trees force them to. From a seed’s point of view, finches are deadly—every bit as predatory as a Sharp-shinned Hawk is to a finch. So the trees fight back by controlling the food supply. They save up to produce massive amounts of seeds in one year and very few the next. In years with lots of seeds, finches have more than they can eat, so some survive to germinate; in years without seeds, they must take to the skies to find better pickings.”

Calgary is at the southern edge of these crossbills’ year-round residential zone, so perhaps Calgary winters bring a mix of resident and migratory White-winged Crossbills. The Calgary bird checklist shows that the White-winged and Red Crossbills can be present in Calgary during any season but the numbers are erratic from year to year and season to season. Both Crossbills nest in Calgary.

This was the first bird of this species I’ve seen since moving to Calgary (I saw it on October 26th 2015). And I saw my second one on November 1st, a few blocks from where I live, atop a spruce tree.

I wrote this post in early November 2015 and left it as a draft thinking I would wait to see some adult crossbills (both White-winged and Red). For 2 months, I wandered around my neighbourhood with my camera, my head tilted to the sky looking for little flocks of flying crossbills or crossbill-busy spruce tops. I took tons of photos! Most are mediocre (spruces are really tall and the sun wasn’t always in a favourable position), but a few show some nice colours and feather details. Once I pick out my favourites, I think they deserve their own post. So, you can look forward to some red and yellow feathers coming your way soon! In both crossbill species, the males are mostly red while the females are mostly yellow.